Kareena Kapoor Khan, who celebrated her 41st birthday on Tuesday, received a belated wish from actor Arjun Kapoor on Thursday. The 36-year-old actor posted a picture on Instagram to extend his wishes to Kareena. However, it was the choice of picture that caught the attention of many. Arjun shared a throwback picture from the sets of his recent movie Bhoot Police where Kareena was not in the centre of the frame, but her elder son Taimur was.

Arjun was seen stroking Taimur’s hair while actor Saif Ali Khan was accompanying them, in the get-up of his character in the film. With Saif, Arjun, and Taimur in the centre of the frame, Kareena was almost out of focus and at the edge of the picture with her face mask on. The snapshot was from the Bhoot Police sets in Himachal Pradesh where part of the movie was shot. Arjun explained the reason for sharing the picture in the caption where he mentioned, “Happy belated birthday Bebo. I just wanted an excuse to post this image of Tim, Nawab Saab and Me but we all know even out of focus you shall always be the centre of attention in every frame. Here’s to more good times on and off set especially when we make you also do the sequel to Bhoot Police.”

This year the actress celebrated her birthday in Maldives with her husband Saif and two children Jehangir and Taimur. Kareena shared a picture on Instagram on Tuesday where she showed her 7.8 million followers how she celebrated her special day with the family. The actor was seen walking on the beach during the sunset with her family as the words ‘Happy Birthday’ burned in the background.

The actress wrote in the caption, “Keep the fire burning… birthday promise to myself.”

Nobel Prizes In Science, Literature To Be Awarded In Winners' Home Countries Due To COVID-19

All The Pics From Varun Dhawan-Natasha Dalal’s Wedding 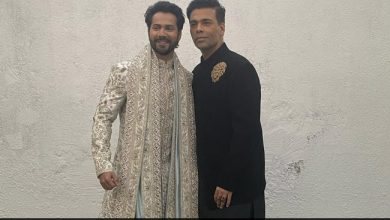 At Varun Dhawan And Natasha Dalal’s Wedding, Karan Johar Was Filled With “A Multitude Of Emotions”