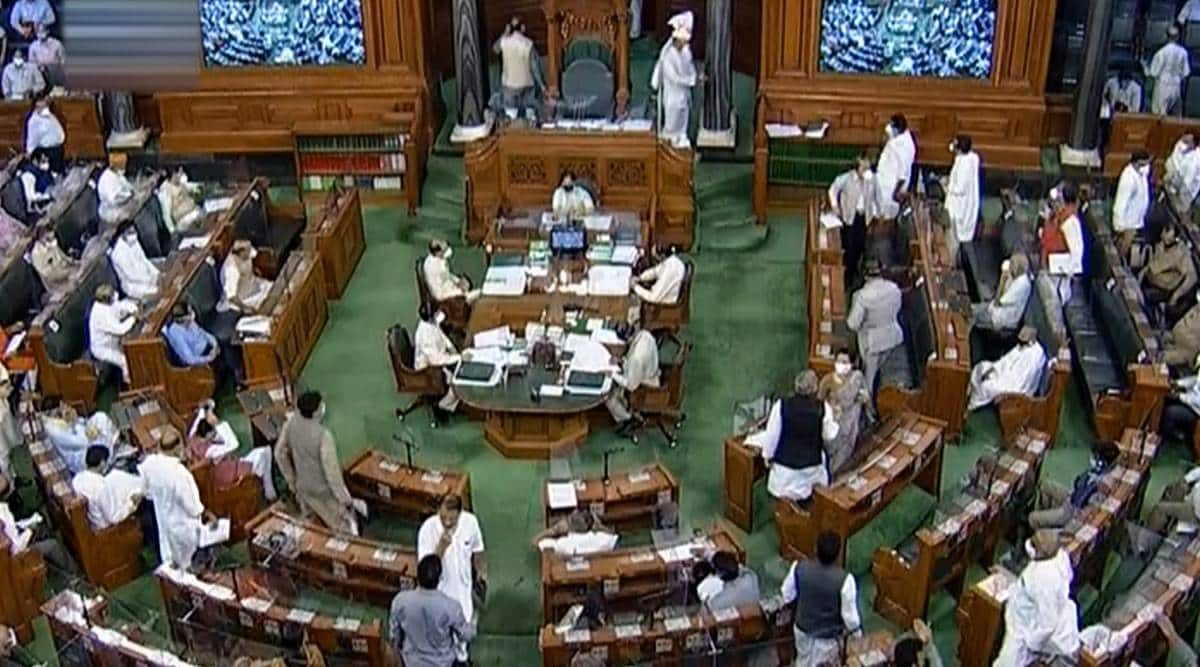 Parliamentarians in Lok Sabha during the ongoing Monsoon Session of Parliament, in New Delhi. (Photo: LSTV/PTI)

IN THE face of intensifying protests against its contentious farm Bills ahead of the Bihar elections, the Government and the BJP have kickstarted a campaign to counter Opposition claims that the laws are “anti-farmer”.

In the Lok Sabha Monday, Union Agriculture Minister Narendra Singh Tomar announced an increase in Minimum Support Price (MSP) for six rabi crops. He said the decision proves the Government is committed to retaining the MSP mechanism and “clearing the lie” spread by the Opposition.

The decision was read out on the floor of the House and followed by a press conference by three Union Ministers, Ravi Shankar Prasad, Piyush Goyal and Pralhad Joshi. The MSP of wheat has been increased by Rs 50 per quintal, barley by Rs 75, gram (chana) by Rs 225, lentil (masur) by Rs 300, rapeseed & mustard by Rs 225, and safflower by Rs 112.

Read: Leaders of 18 parties urge President to not give assent to farm legislation

Tomar’s announcement came hours after Prime Minister Narendra Modi reiterated, during a virtual address at a foundation event for highway projects in Bihar, that the Farm laws were “historic and necessary”.

Taking a swipe at the Congress, he said: “After these historic changes in the agriculture sector, after such a big system change, some people saw that it is slipping out of their grip. So now, these people are trying to mislead farmers on MSP.”

Read | Maharashtra farmers’ union plans to take to the streets too, but in support of new Bills

This was the second time in three days that Modi has hailed the contentious Bills and criticised the Opposition while addressing events in poll-bound Bihar.

On Monday, three Congress MPs — Gurjeet Singh Aujla, Jasbir Singh Gill and Ravneet Singh Bittu — rushed out of their seats as Tomar made the announcement and shouted slogans against the Government. Aujla tore papers and flung them in the air before walking out in protest.

The BJP, meanwhile, has launched a massive drive to counter criticism that the two Bills — The Farmers Produce Trade and Commerce (Promotion and Facilitation) Bill 2020 and the Farmers (Empowerment and Protection) Agreement on Price Assurance and Farm Services Bill — are against the interests of farmers.

Explained: When can MPs be suspended from the House? What Rules are followed in the process?

Following widespread protests by farmers in Punjab and Haryana, and the resignation of SAD leader Harsimrat Kaur Badal from the Union Cabinet, the party has asked its MPs, leaders and functionaries to go on the offensive and explain the salient features of the Bills, sources said.

After the SAD move, Tomar has met separate groups to explain the provisions of the Bills and highlight those that the government believes would benefit farmers. The Agriculture Minister also met BJP functionaries, including Ministers and leaders in and around Punjab, and urged them to go on the offensive against the Opposition’s criticism.

Tomar also held a virtual meeting with agriculture ministers of BJP-ruled states, spokespersons at the national and state levels, and officebearers of the Bharatiya Kisan Sangh and Swadeshi Jagaran Manch — two RSS affiliates that have protested against the Bill. Tomar held another meeting with MPs on the Bills’ provisions.

BJP Parliamentary Secretary Balasubrahmanyam Kamarsu has distributed campaign material for the MPs on the Bills. Besides, all party leaders including ministers have been asked to use Twitter to push the Bills, sources said.

After the MSP announcement, BJP chief J P Nadda tweeted: “The central government has not only increased the MSP but also increased the purchase on the MSP to ensure the remuneration value of the farmers. The false face of people who mislead farmers on the basis of facts has been exposed today, they should now apologize to our Annadata brothers and sisters.”

Mi Smart Speaker Expected to Launch in India on September 29