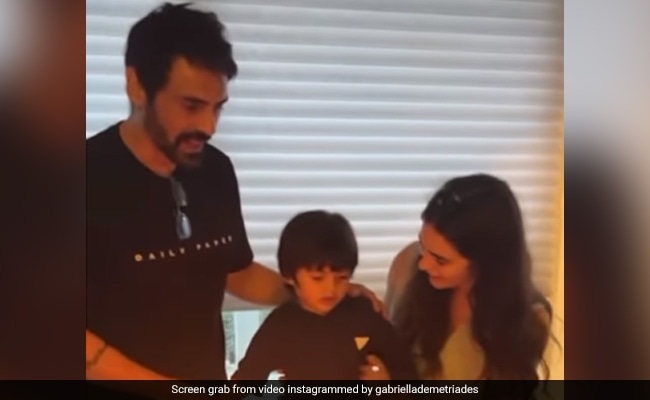 Arjun Rampal’s son Arik celebrated his 2nd birthday recently, pictures and videos from which were shared by his mom Gabriella Demetriades on Instagram. She shared a video of the birthday boy along with his cake and she wrote: “Happy birthday my love Arik Rampal. You’re my greatest achievement and thanks to all my other loves for making his “no kids kids party” so special.” The comments section was flooded with birthday greetings for the little munchkin. Riddhima Kapoor Sahni dropped heart emojis. “Happy birthday cutie,” wrote Mouni Roy. Arik’s sister Myra Rampal also dropped a heart emoji on the post.

This is what Gabriella Demetriades posted:

Arjun Rampal’s daughter Myra also posted a wish for her brother. “Happy birthday to my little monkey,” she captioned the post.

Gabriella Demetriades, a South African model, is also a designer. She owns a fashion label named Deme Love. Gabriella and actor Arjun Rampal are parents to a boy named Arik. Arjun Rampal has two daughters Mahikaa and Myra with his former wife and supermodel Mehr Jesia.

On the work front, Arjun Rampal was seen in the box office debacle Dhaakad, starring Kangana Ranaut. He also featured in the web-series The Final Call. In terms of films, his last big release was the 2018 film Paltan, directed by JP Dutta. He also starred in Zee5’s Nail Polish, alongside Manav Kaul. The actor is best-known for his performances in films such as Ra.One, Om Shanti Om, Heroine, Raajneeti, Inkaar, to name a few.