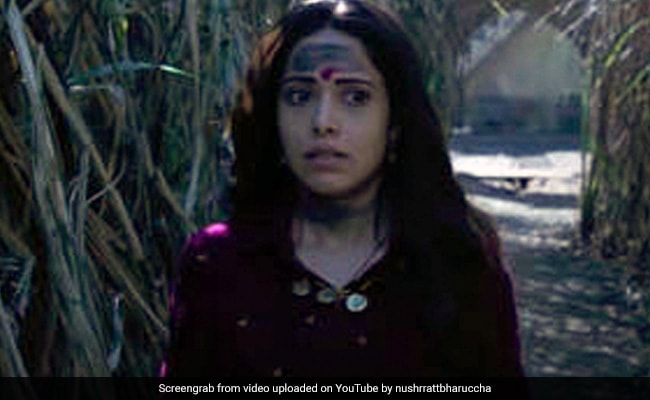 Nushrratt Bharuccha on Tuesday shared the teaser of her new film Chhorii. If the short video is anything to go by, the film puts Nushrratt’s character right in the centre of an enlarging web of secrets, horror and evil forces. Making the situation even more complex is the fact that the actress plays a pregnant woman who has to protect her unborn child against these otherworldly spirits. The teaser begins with Nushrratt Bharuccha’s character suggesting to a man, presumably her husband, that they should move someplace for a few days so they can be safe. The duo ends up in what appears to be a haunted home in a village full of sinister secrets.

The teaser reveals that Nushrratt’s character, Sakshi is surrounded not just by sugarcane fields but also by an old couple and three kids who are not who they seem to be.

Soon enough, Sakshi is seen looking dazed and panicked at the happenings around her. She even goes on to the say, “Yeh sab sach nahi hai. Yeh sab bhram hai. (This is not true. This is an illusion).”The teaser ends with a bloody handy reaching for Sakshi’s stomach as she is sleeping.

The official synopsis of the film as shared on YouTube by the streaming platform, Amazon Prime Video, says, “Set deep in the heartlands, Chhorii is the story of a modern, young couple, Sakshi (Nushrratt Bharuccha) and Hemant. Sakshi is eight months pregnant with her first child when the couple, forced out of their home, escapes from the city and seeks refuge in a house located deep inside sugarcane fields. The house is inhabited by an old couple who seem to know more than they tell. Unknown to Sakshi, the house and the fields are ridden with dark secrets that start unravelling as the story unfolds, posing a threat to Sakshi and her unborn child. Even as Sakshi tries to save herself and her unborn baby, scary sightings of three mysterious kids and a charred monster coupled with an eerie lullaby, emanating from an old transistor, wreak havoc with her sanity.”

A few hours before the teaser was launched, Nushrratt Bharuccha also released the first-look poster of the film. It features Nushrratt Bharuccha as Sakshi standing in front of a puddle with the sugarcane field around her. While she stands alone, her reflection is flanked by the three sinister boys.

The caption says, “Fear is about to become your new best friend!”

Chhorii is directed by Vishal Furia and is produced by T-Series, Abundantia Entertainment, Crypt TV and A Pshych Film. The film also stars Mita Vashisht, Rajesh Jais and Saurabh Goyal in pivotal roles. The film is based on the Marathi film Lapachhapi. Chhorii will be available for streaming on November 26 on Amazon Prime Video.