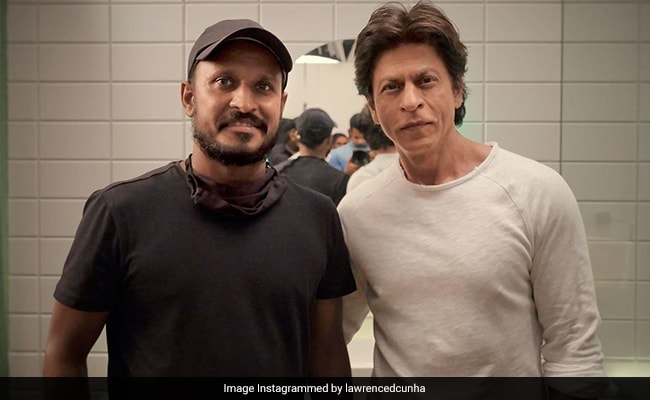 It can be easily said that Shah Rukh Khan knows how to charm his way into the hearts of the audience. Cinematographer Lawrence Dcunha, on Tuesday, shared a picture with Shah Rukh Khan only to speak of his humility and having a “no dull moment” while working with him. “Such a gentleman,” wrote Dcunha in his elaborate Instagram post about working with SRK for an ad shoot. According to Dcunha’s post, SRK pulled an all-nighter for his upcoming film and therefore, arrived late on the sets of the ad shoot. But he “sweetly apologised for the delay”.

Dcunha wrote, “My first ad film shoot with king khan!!! Although he shot throughout the night for his upcoming movie, he came slightly behind schedule but sweetly apologised for the delay. He was very respectful, thoroughly professional, yet joking and making people laugh on the set. We didn’t have a stand in for him, so he sat on the mark and asked me if I could continue with my lighting while he was rehearsing his lines. His acknowledgement towards his technicians and crew overwhelmed me, that he addressed each one by their names. There was no dull moment with him on the set.”

He added hashtags like “fan boy moment”, “I love my job” and “pic of the day” with his post, further sharing, “When the shoot was finally done, he shook hands with everyone. He stayed till the very end and even clicked pictures with all of us. Such a gentleman!!!”

Shah Rukh Khan has three films coming up. He will star in Pathan alongside Deepika Padukone and John Abraham, which is releasing in January 2023. Next, he will feature in Rajkumar Hirani’s Dunki co-starring Taapsee Pannu. He has also signed up for Atlee’s Jawan.