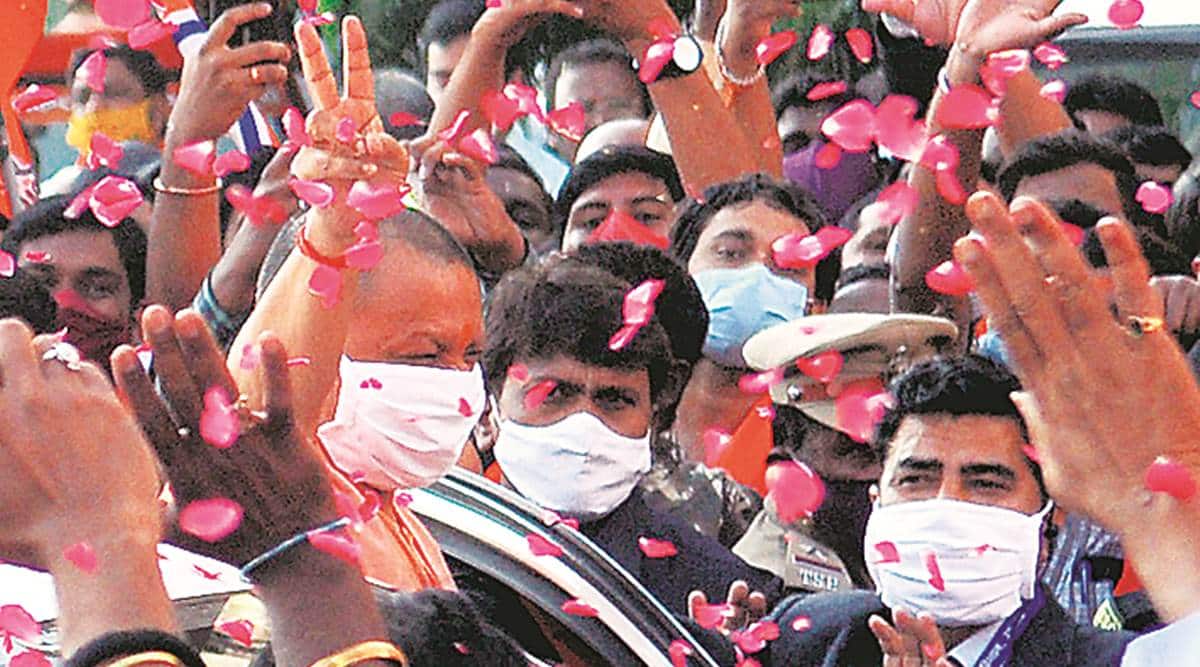 Addressing a public meeting in Hyderabad on Saturday, Yogi Adityanath said, “If we win, we will turn Hyderabad into Bhagyanagar… Some people were asking me if Hyderabad can be renamed Bhagyanagar. I said, why not. I told them that we renamed Faizabad as Ayodhya and Allahabad as Prayagraj after BJP came to power in Uttar Pradesh. Then why can’t Hyderabad be Bhagyanagar?”

The Uttar Pradesh Chief Minister joins a long list of leaders deployed by the BJP to campaign for the December 1 elections to the Greater Hyderabad Municipal Corporation — from Union Home Minister Amit Shah, who is scheduled to visit the city on Sunday, to party president J P Nadda, Union minister Smriti Irani, and youth wing president Tejasvi Surya, who is known for his inflammatory speeches. Besides, the party has got Bhupender Yadav, party general secretary and its match-winner in Bihar, to camp in Hyderabad to oversee the election work.

Never before has a municipal election in Telangana or the erstwhile combined state of Andhra Pradesh witnessed this degree of attention. What makes it different this time is the BJP’s high-pitch campaign, with the party rolling out its heaviest artillery ahead of the polls.

This is the first time that the BJP — which holds just four seats in the present municipality — has emerged as a key contender against the ruling Telangana Rashtra Samithi (TRS) in the GHMC election. The TRS, which swept the 2016 polls it contested in alliance with Asaduddin Owaisi’s AIMIM, holds 99 out of 150 seats. The AIMIM has 44, Congress 2 and the TDP 1.

However, a lot has changed since 2016. While the TRS swept the Assembly elections in December 2018, in the Lok Sabha polls of 2019, the party lost four crucial seats to the BJP. The BJP, emboldened more recently by its win in the bypoll in Dubbaka (earlier a TRS stronghold) earlier this month, has decided to go all out in the GHMC polls.

The challenge from the BJP has even forced the TRS to delink itself from the AIMIM, which has an almost impenetrable hold on the Walled City’s 44 wards. The Congress, meanwhile, has been swept aside by the high-octane campaign of the TRS, BJP and AIMIM.

For the BJP, winning the GHMC is linked to a larger ideological battle. The party, which links Hyderabad to its Muslim identity, AIMIM and the Owaisi family, is looking for an opportunity to take the fight to the AIMIM camp.

The BJP’s firebrand leaders miss no opportunity to link Hyderabad and Owaisis to the razakars, the Nizam’s powerful private militia. Party leaders say the AIMIM’s attempt to grow outside the state — including the recent Bihar elections, in which Owaisi’s party won five seats — needs to be checked in his stronghold Hyderabad.

Speaking in Hyderabad last week, Surya said, “If you vote for Owaisi here, he becomes strong in Uttar Pradesh, Bihar, Maharashtra, Muslim localities in Karnataka…Who is Owaisi? Owaisi is Jinnah’s new avatar. We must defeat him. Every single vote you give BJP is a vote for Bharat, Hindutva, to make the country stronger. A vote for Owaisi… is a vote against India and everything that India stands for.”

The party also sees the GHMC election as an opportunity to test its strategy and strength for a bigger battle for the state and beyond.

The BJP, which now has two MLAs and four MPs from Telangana, is eyeing the 24 Assembly and four Lok Sabha constituencies that are part of the GHMC area.

“For the BJP, there’s nothing to lose. Whatever we win in this GHMC will be a big achievement as it helps the party to have a good start for the next Assembly election. BJP wants to emerge as the alternative force in Telangana,” a senior party leader said.

The GHMC is also part of the party’s larger strategy to emerge as a political force in the southern states. Apart from Karnataka, the BJP does not have much of a presence in Andhra Pradesh, Telangana, Tamil Nadu and Kerala.

Even before the 2019 election, the BJP had prepared a blueprint for its South Mission, focussing on Telangana and Tamil Nadu. With the party anticipating that anti-incumbency could affect its chances in Tamil Nadu, where it is fighting elections with the ruling AIADMK, Telangana is its best bet, said a senior BJP leader.

While talking about the significance of the GHMC election for the party, BJP general secretary Bhupender Yadav told The Indian Express, “This is an election affecting one-third of the state and its people. We want to make Hyderabad an international city and make it a model for others. We are fighting for a good and clean administration and we want to fight the corruption of the TRS.” The party, he added, is keen to “expand at the grassroot level in southern parts also.”

The BJP’s estimates are that the party could win anywhere between 25 and 50 seats. “If we are able to win more than 45, the BJP could even be the largest party in the corporation. We can also weaken the AIMIM, which has a significant support base in Hyderabad,” Yadav said.

The TRS and the AIMIM have, however, dismissed the BJP’s push.

Said P Pavani Reddy, TRS corporator from Dr A S Rao Nagar ward, “I haven’t seen this kind of political heat in Hyderabad even during Assembly elections. The BJP has raised the pitch to a different level. Of course, TRS will win comfortably. People of Hyderabad want to live peacefully, not be divided on communal lines.’’

“They are making so much noise, but during the floods last month, where was the BJP? I don’t think their strategy to divide people on communal lines will work here,” said veteran AIMIM corporator from Riyasath Nagar Mirza Mustafa Baig.